RFID: The Future of Pharmacy

RFID is the future of Pharmacy.

I was around in the late 80’s working for a medical device company in San Diego when I read a bold statement from Ron Taylor, a local executive, who claimed, “Barcoding is the future of hospital pharmacy.”

Bar coding goes back much further than the 80’s. The first patent for bar coding dates back to 1952. The first commercial application came seven years later in the railroad industry as a way to track railroad cars. However, it wasn’t until 1966 that barcode technology became widely accepted. The food industry led the adoption, using barcodes to track inventory and automate grocery checkout. Today, barcodes are everywhere.

Although there has been widespread adoption, there have been very little technological advancements in barcodes since the 1960’s. Inherent issues still exist.

In the hospital setting, there remains the line-of-sight requirement; you can only scan one drug at a time. Individuals who use these systems are in very busy and stressful environments. Complicated workflows open the door for workarounds and human errors, significantly reducing the effectiveness and accuracy of barcode systems. Pharmacists and clinicians are forced to accept these shortcomings requiring manual audits and manual reconciliations.

Why RFID is the Future 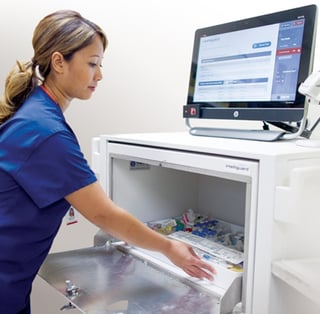 While RFID’s commercial application began in the early 2000’s, recent improvements have dramatically advanced the technology, significantly reducing costs and expanding adoption at a rapid pace. According to RAIN, this exponential growth is projected to continue as RFID addresses the inherent flaws that are currently associated with barcoding.

With RFID, users no longer need to scan one item at a time. Large inventory batches scan in seconds with remarkable accuracy. Other industries, such as retail, industrial, manufacturing and automotive have successfully paved the way for commercial adoption using RFID extensively to automate manual processes and gain greater accuracy and visibility into their enterprise.

In today’s healthcare environment, there are less and less opportunities to improve efficiencies and reduce cost. The pharmacy is often the target of administrators, who are pressured to find ways to improve compliance and increase accuracy while significantly reducing cost.

This is why I believe RFID is the future of hospital pharmacy.

What are your thoughts about this article? What do you see in the future for pharmacies? Post your comments to share your perspective with our professional community.

Helping Hospitals and Caregivers Through the Pandemic: New Updates from IntelliGuard

The Future of Pharmacy is Here! Join our webinar series: